Nothing beats the excitement of live demos. Through a successful collaboration with Excelitas Technologies, we designed a live demo of a modular flow cytometer in less than 2 months and showed it at three conferences in three countries this year.

The ability to integrate hundreds of off-the-shelf components for this modular unit in a very short period of time was a critical part of this project. Kinetic River’s experience in rapid prototyping and in-depth biophotonics technical expertise, in conjunction with a partner with a great depth in optics, photonics and optomechanical components, allowed us to debut this unit in the U.S. at SPIE Photonics West 2015 (Feb. 2015) in San Francisco.

– We received many positive comments, such as:
– “I really like this—I want to have one. Actually, two.”
(Principal Engineer at major OEM)
– This open platform is an engineer’s dream.”
(Researcher at academic institution)
– The MFC has a modular and flexible configuration:
– it gives hands-on researchers quickly what they want
– it has an easy to expand form factor that helps minimize re-work
– it’s “buy-as-you-go.” You can add over time as budgets allow
– The demo showed the optical engine of the MFC in full display:
– it highlighted Kinetic River’s open-chassis approach to modularity
– demo was easy to reconfigure with Excelitas’ rail and cage systems

Later we followed up this live demonstration with two more back-to-back demos in Europe in June. Despite having to have the unit shipped overnight from Munich, Germany to Glasgow, Scotland, the instrument worked right out of the box! 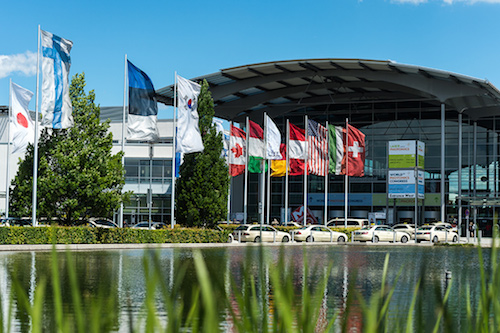 – more than 1,200 exhibitors and 31,000 visitors
– premier international trade fair for the laser and photonics industry
– the MFC live demo was featured in Excelitas’ booth in Hall B1
(Optics/Manufacturing Technology for Optics) 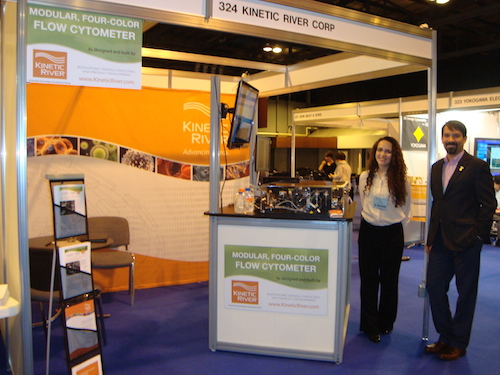 – 30th Congress of the International Society for Advancement of Cytometry
– ours was one of the very few booths demonstrating a live flow cytometer
– the MFC was the only fully configurable flow cytometer on display
– interest from the European Society for Clinical Cell Analysis (ESCCA):
– using the MFC as a teaching tool at next year’s flow cytometry course

Examples of the power of the MFC’s flexibility could be found all over the show floors at each of the conferences. Many laser manufacturers have recently introduced orange lasers to meet the new demands of research customers. However, no manufacturer is currently offering these new lasers on a commercial flow cytometer.

With many larger vendors, you may have to wait years before a feature you need becomes widely available. With Kinetic River, all you need to do is ask—and we’ll configure an MFC sporting an orange laser—or any other laser of your choice.

Look for the MFC at both the BiOS and Photonics West trade shows in February 2016 in San Francisco.

Fluorescence Lifetime Flow Cytometer In cell biology and cancer research, there is often the need…