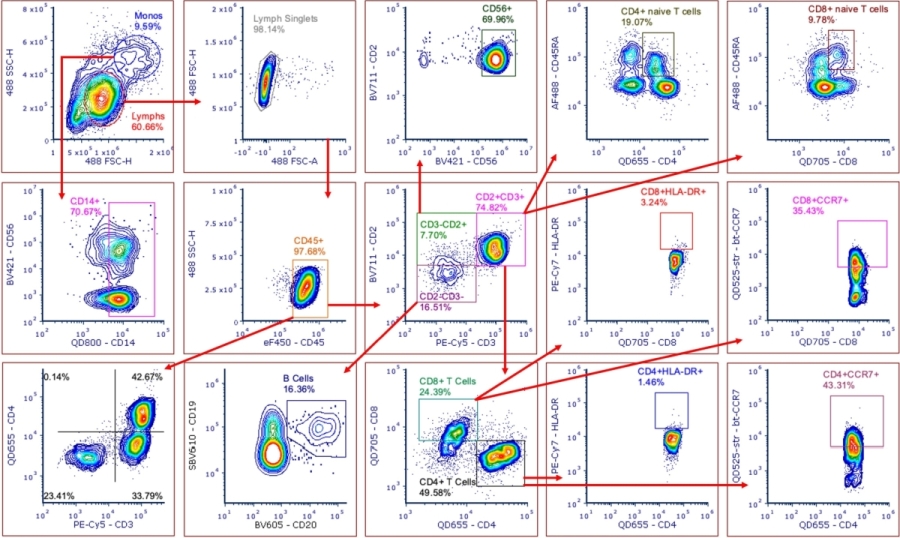 The NIH award enabled the continued development of Kinetic River’s Arno technology for time-resolved cell analysis. Kinetic River’s patented approach makes possible the achievement of 12-color compensation-free flow cytometry. By discriminating fluorescent markers not only by their color but also by the decay of their fluorescence emissions (their “lifetime”), the Arno avoids the issues of spectral spillover that hamper existing flow cytometers. We have also demonstrated a doubling the number of markers measurable per detector, paving the way to tripling them and greatly expanding the multiplexing capability of similarly equipped analyzers.

Lifetime-based discrimination allows emissions from multiple markers to be collected by each detector, greatly expanding the analytical power of flow cytometry while minimizing the number of lasers and detectors needed in a system. “These results cap more than seven years of research and development,” said Giacomo Vacca, Ph.D., president of Kinetic River. “The fact that we were able to perform a 12-marker assay using only 2 lasers and 6 detectors is unprecedented.”

Dr. William Telford of the National Cancer Institute, who collaborated on these experiments, said: “We performed benchmark measurements on a spectral cytometer using the exact same fluor-antibody conjugates as on the Arno compensation-free analyzer, and the results were very much in agreement. In some cases, the Arno was able to distinguish fluor contributions even where the spectral cytometer struggled due to the near-complete spectral overlap between fluorescent emissions.”

Kinetic River recently celebrated our 10th anniversary. It has been an incredible ten years—the company has grown significantly in that time and has much to be proud of. As we look back, we are humbled by the growth we have achieved and our impact in the field.

Kinetic River is pleased to announce that Courtney Harris will now be leading the sales and marketing efforts for the North American market.